On the corner of the High St. and Tamworth Rd, nestled directly above the railway, a fortress-like piece of architecture mysteriously sits waiting for its Superman, and by Superman I mean appreciation. Forbidden Planet is a sort of cult entertainment meets comic shop space, but to be honest to get a sense of what is going on you really do have to visit, because even if you are not a seasoned science fiction fan long periods of time can be spent browsing the vast collection of characters and colours within. Yet for a piece of Croydon architecture in such a muscular location the real beauty is revealed by the introverted nature of the shops character.

Comic shops are usually thought of as a solely US phenomenon where kids eagerly go on a Saturday morning to get their hands on the latest addition of Superman etc... but their existence in the UK is a quiet one with what appears to be a very private community. Quite often you completely miss these shops in the UK as they appear to depend greatly on the frequency of their veteran customers and not the spontaneous shopper, nevertheless if you have the opportunity  to spend a few minutes in a shop such as Forbidden Plant I highly recommend it. Spare just a minute of your time, stand on the opposite corner where the chinese noodle place is(was?) and really take in this monster of a shop. The white painted expanse is clearly the meat of the shop and the sign just acts as marker more than attraction, but then you will notice the windows, they are truly fantastic with their energetically drawn posters and interesting hero figures, its a god damn cocaine fix of a window display.

As it happens Forbidden Planet is relocating from their legendary fortress in West Croydon into the shop where X Electrical used to be on Church St, a move I guess is influenced by the need to down-size from the large current site. The architecture of the old site was in actual fact the kryptonite that was Forbidden Planets Superman, the angular nature of the shop front as it negotiated the street junction encouraged movement around the exterior of the shop but never luring anyone inside. I know the space and layout of the new site well and although losing volume I feel a more exciting atmosphere might well be created from this situation, Forbidden Planet might in fact gain a wider market base by reeling intrigued people in off the street from the stop-glance-start movement created on the exterior. The windows are key, as long as Forbidden Planet retain their creativity and frequency of attractive window displays the streetscape of Church St will no doubt gain a vibrant new elevation and Croydon will continue to have its very own Superhero. 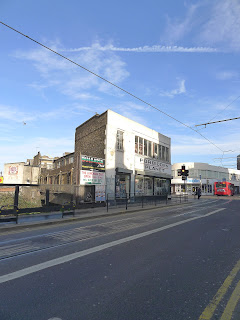 Tom Winter
A life-long member of the cronx and architectural assitant from Croydon in South London, having previously studied at Plymouth and London South Bank University, both of which are undoubtedly amazing places full of variety and colour. This blog is an attempt to disect and understand some architectural truth about my hometown and share with you the delights I hope to discover. The DIRT the CROYDON and the LOVE.